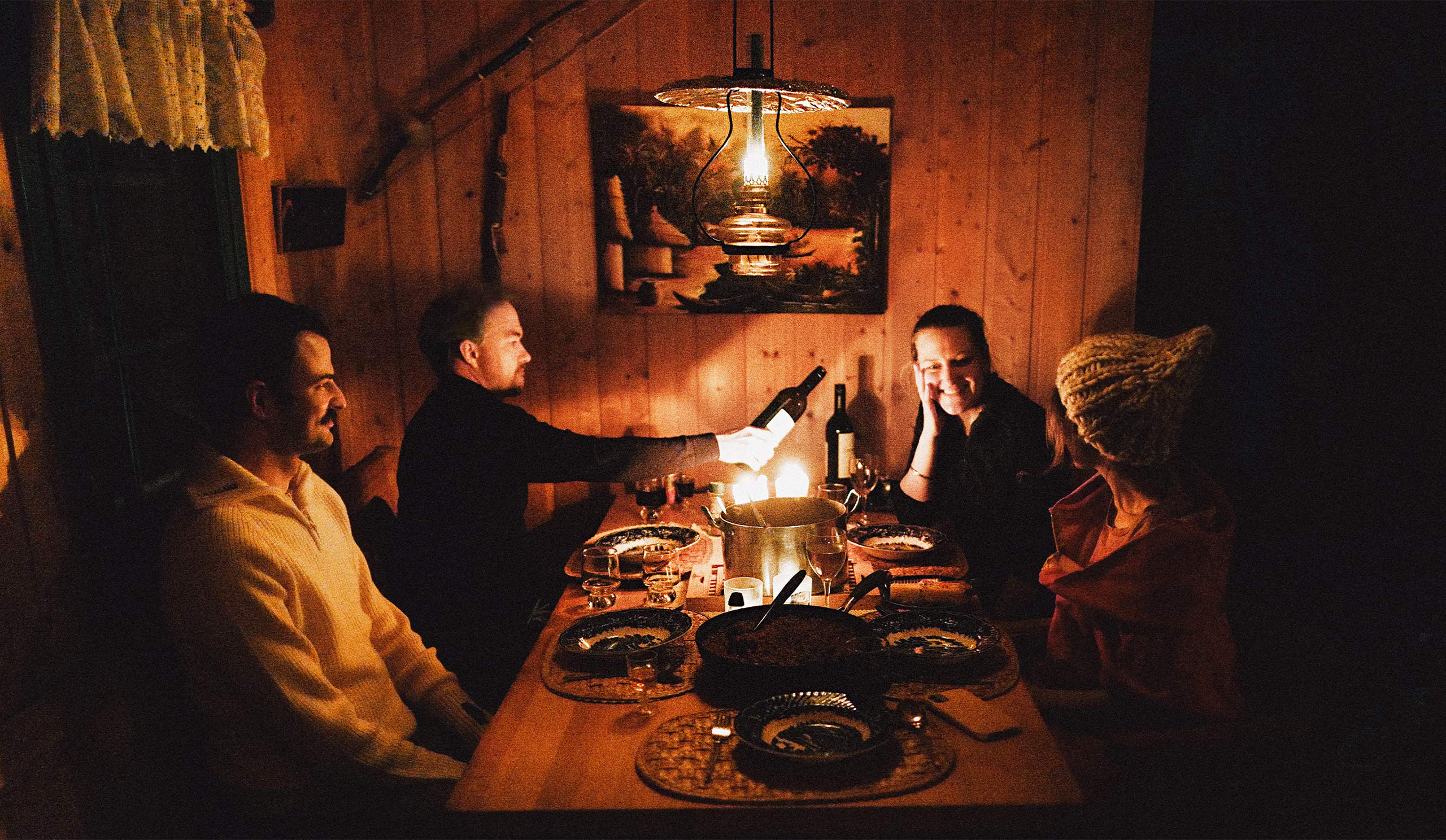 WWe were soaked with mountain freshness, smoke, fire heat, and togetherness not interrupted by technology and distractions. It recalled the closeness of old-time villages.

Just write. Pour courage scattered like letters of the alphabet. What is it formed out of them? Words. Words? When was the time when we made sounds like gorillas? The time when politics and fights were more straightforward- just a bunch of chimps screaming “uuuh uh.” All that noise would disappear with no deep meaning in the jungle of life. Maybe it still does because…

You said you wanted to get out, drive to the desert to breath – I don’t blame you. The air inside the apartments wasn’t even air anymore, and it felt more like water filling the space in which we were trapped in lockdown number – I lost count. Like a fish in an aquarium, we are all too familiar with that algae covered sofa stone and a corner plant. We needed out.

My ticket out was announced with a gentle “ping.” It was a text from my neighbor – a great guy who had an incredible talent for assembling a life stock of characters. “We are going to the mountain cabin, are you coming?” Read Heniu’s message.

At that exact time, I didn’t have the Internet at home – a bizarre punishment that made me say yes to 3 days in the total wild in a heartbeat. I was already sliding back in time, unable to follow up emails, sucking all I could get out of the 4 g with not much luck. Going all the way to medieval in a cabin with no electricity, no water, no heating, and no bathroom seemed almost like a natural choice.

I had no idea who the “WE” to which Heniu referred was. He never spent much time on introductions; throwing the people, some of them strangers, into intimate gatherings like birthdays or weekends out of town. Strangely we all benefited from his roulette and ended up loving each other.

This time the “WE” consisted of Karianne, our hostess and cabin master, Heniu’s old-time friend Henrik, and Zach, who just moved to Norway from Pennsylvania. We met near my apartment and hit the road. 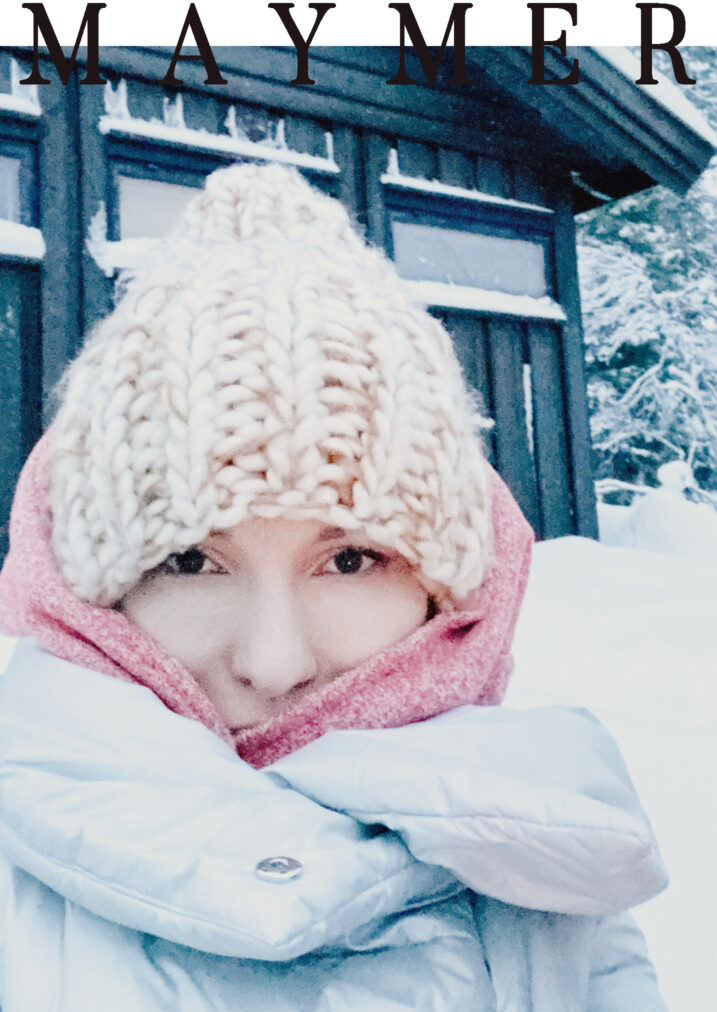 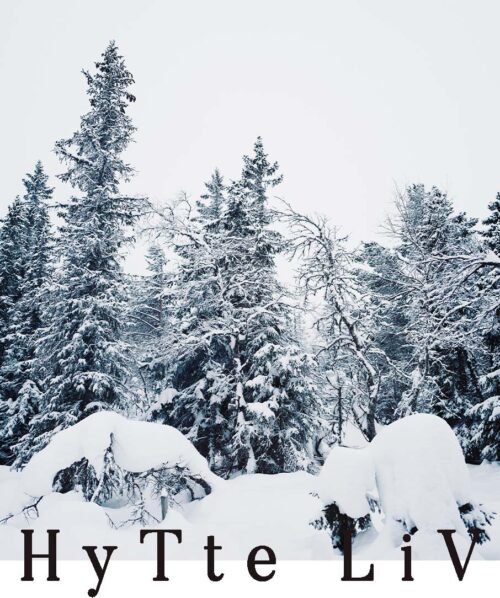 It wasn’t long before snow surrounded us like desert sand and, after a few hours, we were in the mountains. The little roads swirled in twists and turns like a bunch of caffeinated snakes, and I get dizzy thinking of it as I type, just as I did in the car.

I lost my lunch in the depths of a plastic bag that Zach handed me just in time, the GPS lost signal, and we were there – the middle of big nowhere.

“Put these on!” Said Karianne to Heniu, pointing at snowshoes. He was carrying a heavy bag and would drown in 1-meter deep snow that apparently we had to go through. I had no idea we could get even deeper into the wild. We passed a frozen forest diving deep in the snow, and soon we saw our cabin. It looked like a cute donut all glazed by white powdery sugar. There was so much snow around that standing in the corner; one could only see the cabin’s roof; everything else was buried. 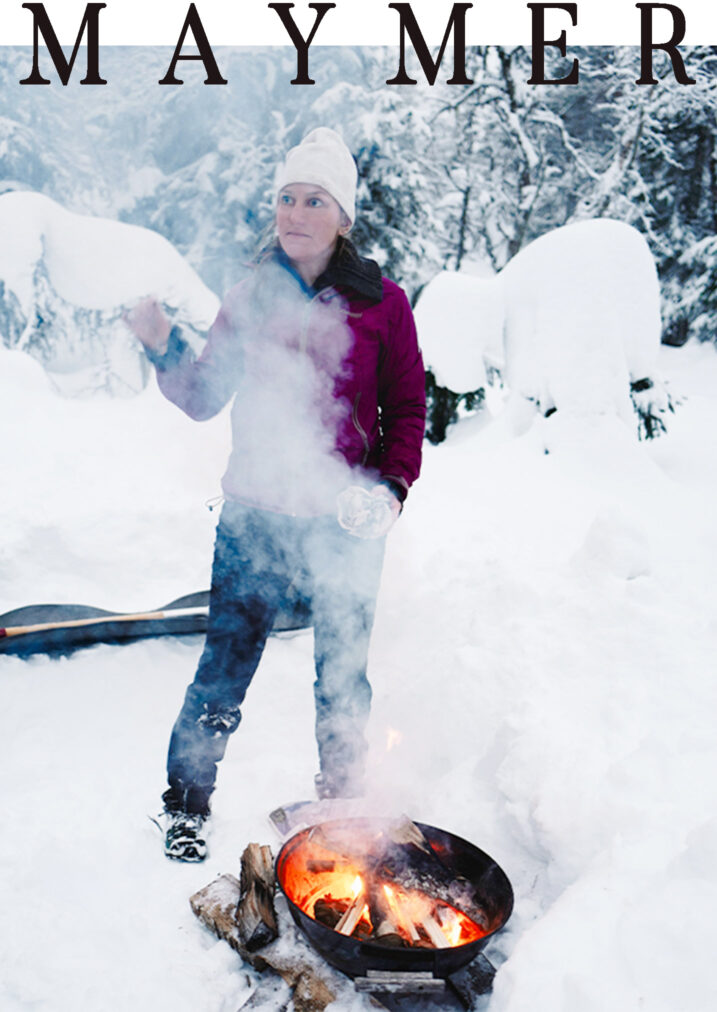 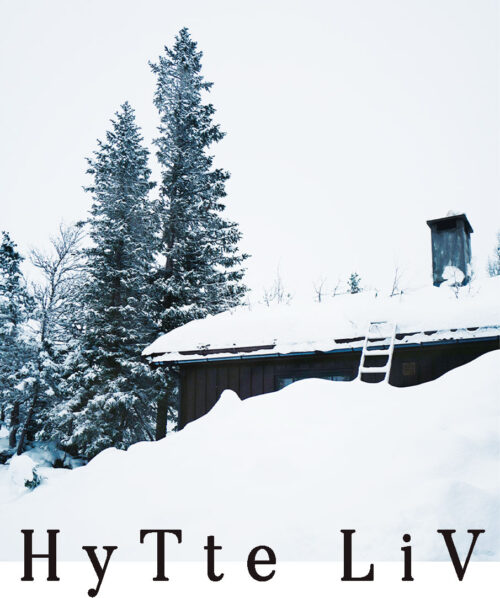 Karianne, a true Viking, came before us to heat the place up, bringing wood and candles. It took hours for the cabin to get warm, but once the huge fireplace got going, it generated so much heat that we could sit around in t-shirts.

“I was thinking of changing the decor and maybe connecting the amenities like water…or sewer,” said Karianne. “But then I thought that nowhere one could get this type of a time travel experience as here!” She added enthusiastically. At first, I was skeptical, but as I drank coffee brewed in snow melt- it didn’t take me long to understand what she meant, and I too fell in love with the idea of keeping everything as it was.

And boy, was it MAGIC.

Everything was so organic, as if the house sprouted from the trees that surrounded it. Frankly, that wasn’t far from the truth as everything besides the fireplace was made of wood. The walls were adorned with travel paraphernalia – “They are my Aunts. She traveled the world and brought all these exotic souvenirs,” Karianne told us. Old books, albums, board games, and porcelain from the 70s glistened in the candlelight. There were gas lamps above the tables and traditional hytta (Norwegian for a cabin) furniture. We had to gradually open the doors to the frozen cold bedrooms and make sure there was enough heat to warm them up.

“Look here,” Karianne urged us, pointing to the floor. She moved the carpet away, revealing a hidden door. That was the “fridge,” a pit in the house’s fundament that was cool and where we kept milk. The only place I heard of something like that was history books, and I was overjoyed to see the real thing and use it. It was simple. Practical. Awesome.

I took fire duty upon myself, gaining the nickname of ‘fire master.’ We sat around the coffee table and had pre-dinner drinks. Time slowed down dramatically. There were no distractions, and it really felt like it was only us five alone in the world. Zach played banjo, and Karianne played harmonica. We spent a lot of time jamming, talking, and taking pictures. 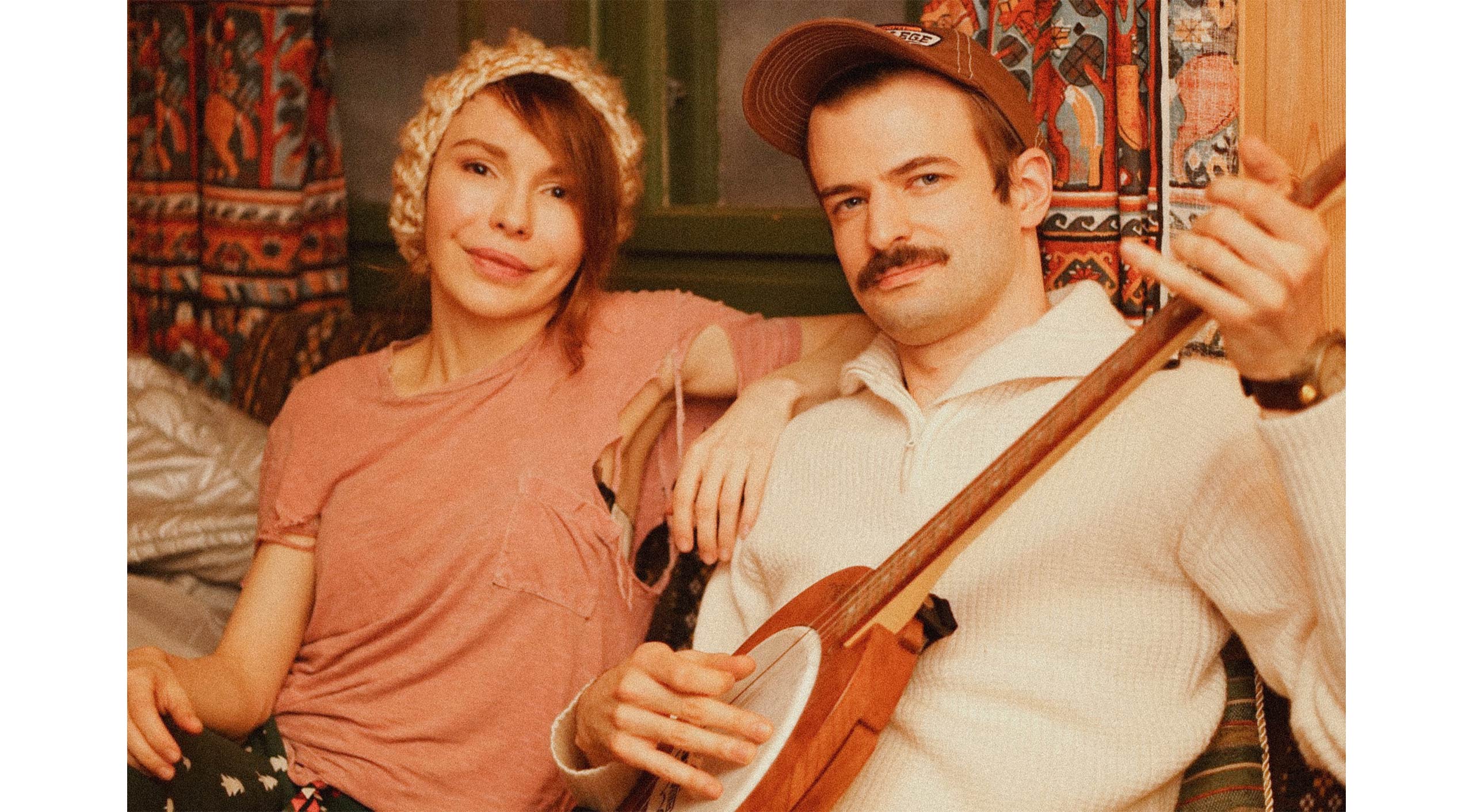 Just like in the old times, everything became a community effort.

We were taking turns in watching the fire, bringing the wood and snow to melt for the water, washing the dishes, cooking, and so on. It was a lot of work that I think made us focus on the moment even more. We were forced to pause, applying an extra effort to the things that with electricity were a matter of pressing a button. ON and GO! didn’t apply here. It was strange…refreshing…fascinating, as if the polarized ions were leaving our bodies once we were away from the Internet and power.

Instead, we were soaked with mountain freshness, smoke, fire heat, and togetherness not interrupted by technology and distractions. It recalled the closeness of old-time villages, and I started to wonder if I had ever seen people as closely as I did when we were there.

We cooked pasta in the melted snow water and made spaghetti on the gas stove. It was delicious, and I liked the thought that the food was infused with Norway’s snowy essence. Or at least that was what I told myself, turning away from the pine needles and sand swirling in a pot. Food was good, but it was hard to say the same about the coffee brewed in the melted snow. It had an aftertaste of a dirty, angry cloud. But man, how cool it was to know how a dirty cloud may taste like.

The day, uninterrupted by notifications, flowed in a constant stream of countless minutes. We played cards and board games, went skiing, and made a bonfire where we spent the evening looking at the blue sky and drinking Jaegermeister.

It was a humbling experience to feel the waves of heat and cold washing over the body taken out of pampered air-conditioned spaces. To feel the effort of the easiest tasks that weren’t so much different from what we knew yet they were. Everything required an extra effort that punched our lazy consciousnesses into the realness of the reality and micro-moments of a moment. A snapshot – steam coming out of the water slowly boiling on the gas stove, pine needles, hot, cold, smoke, silence, laughter, dying phone batteries, reborn hearts. Snow, snow, snow, and it was time to go “home.” 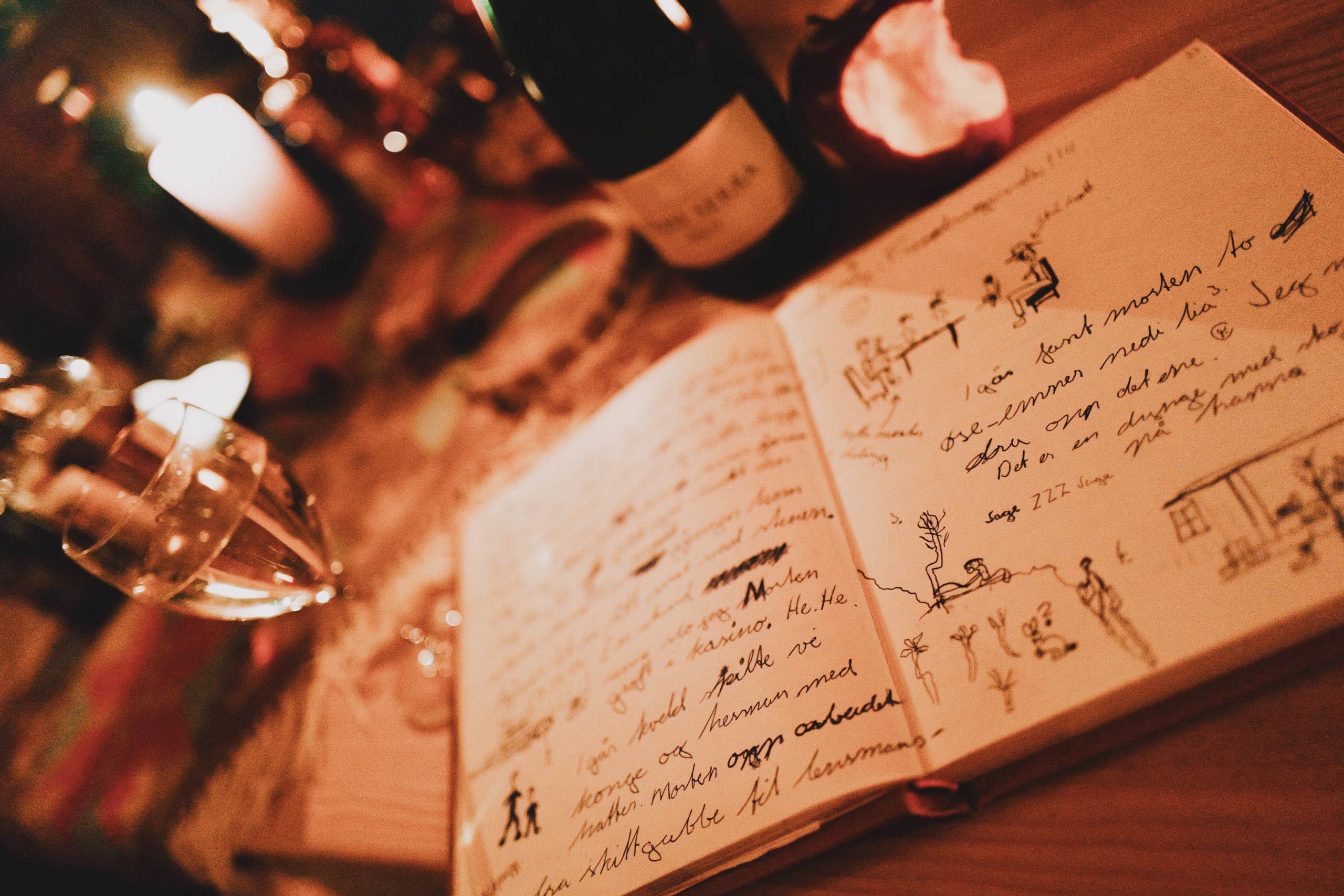 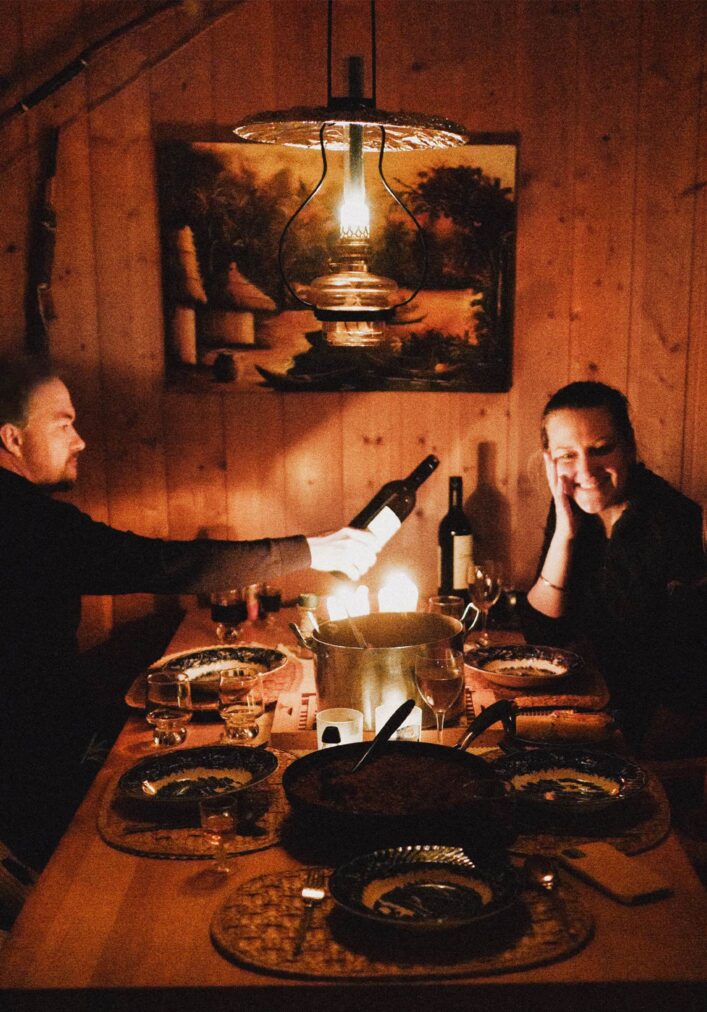 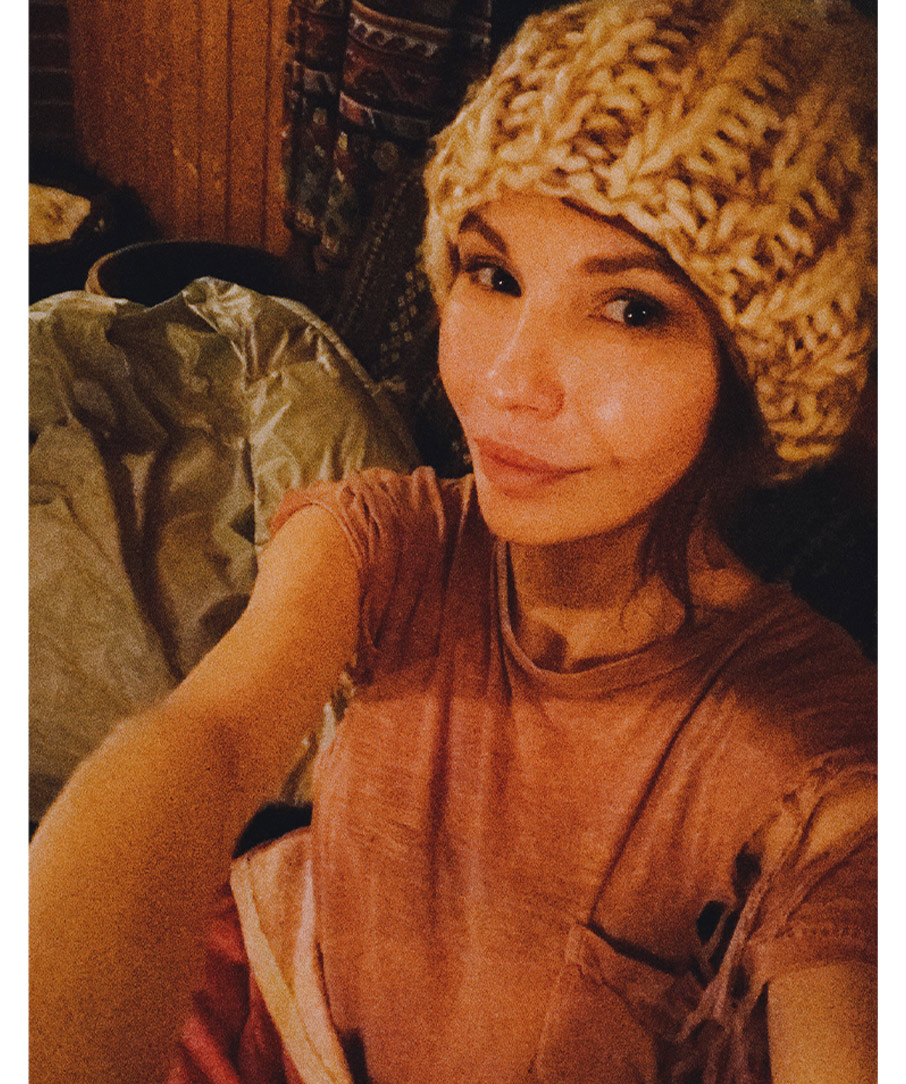 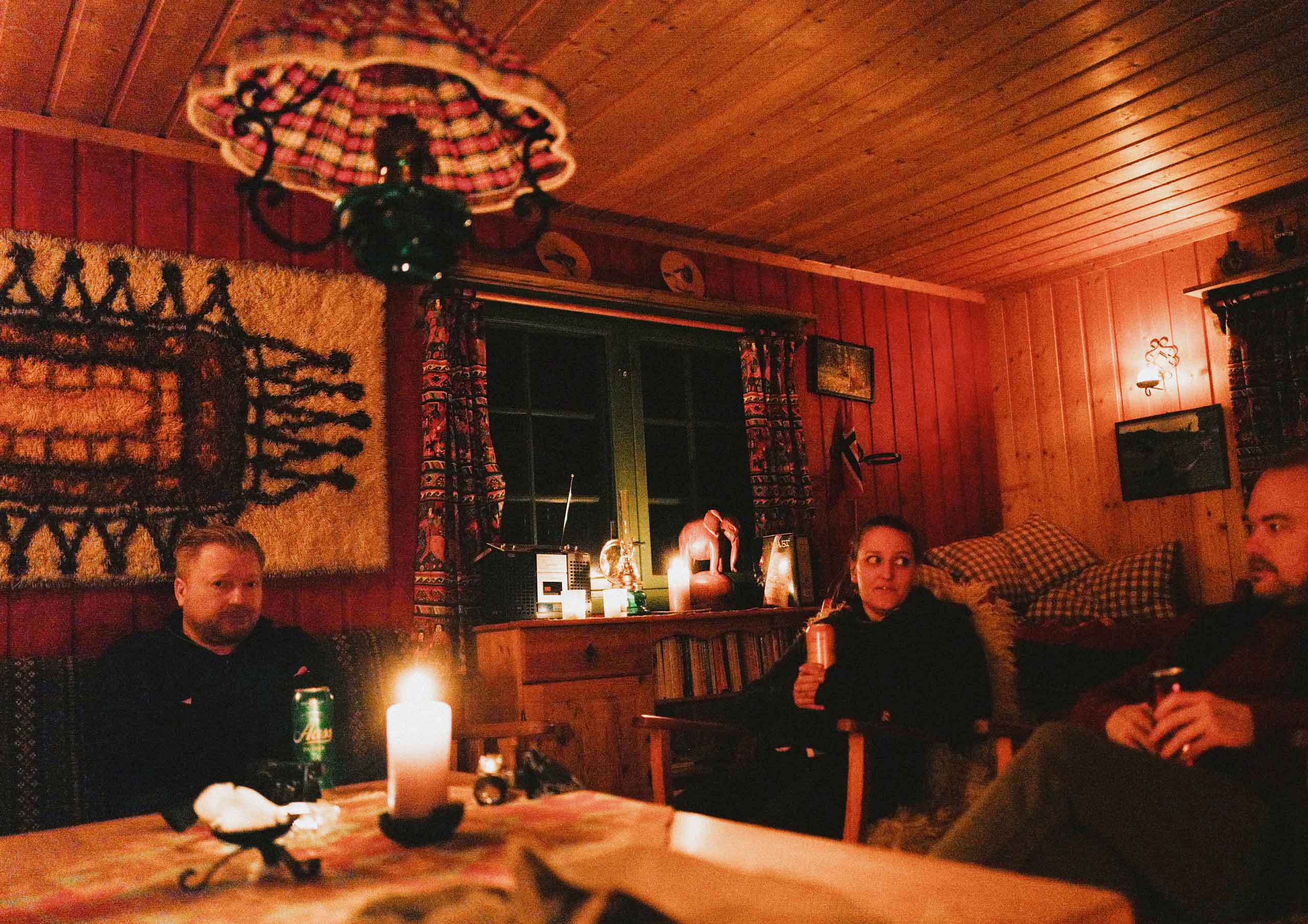 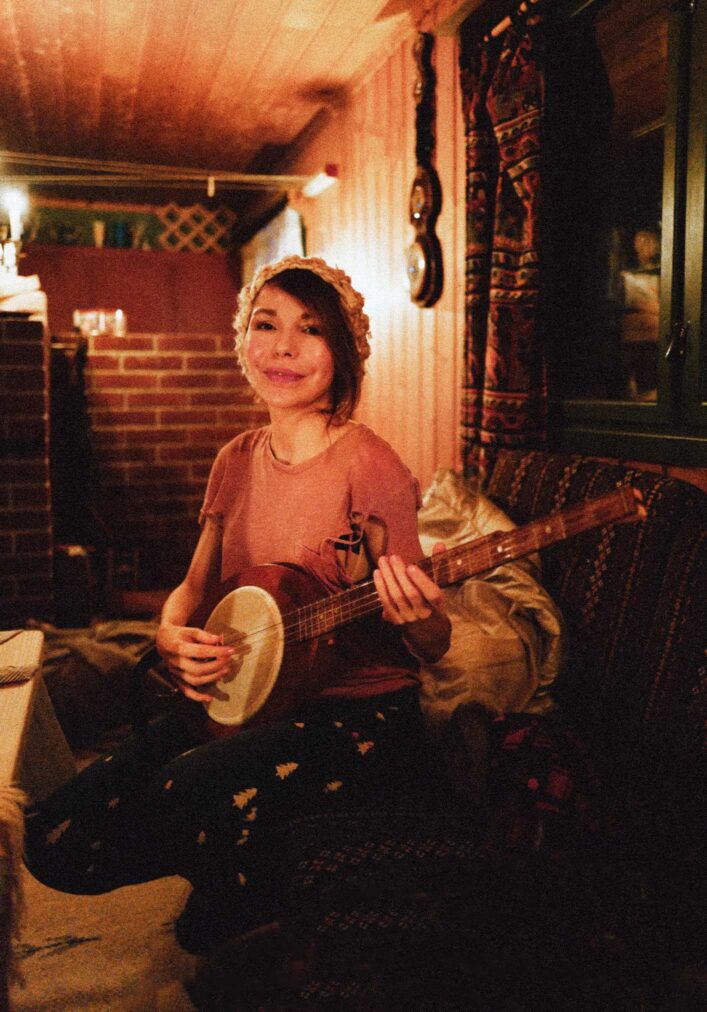 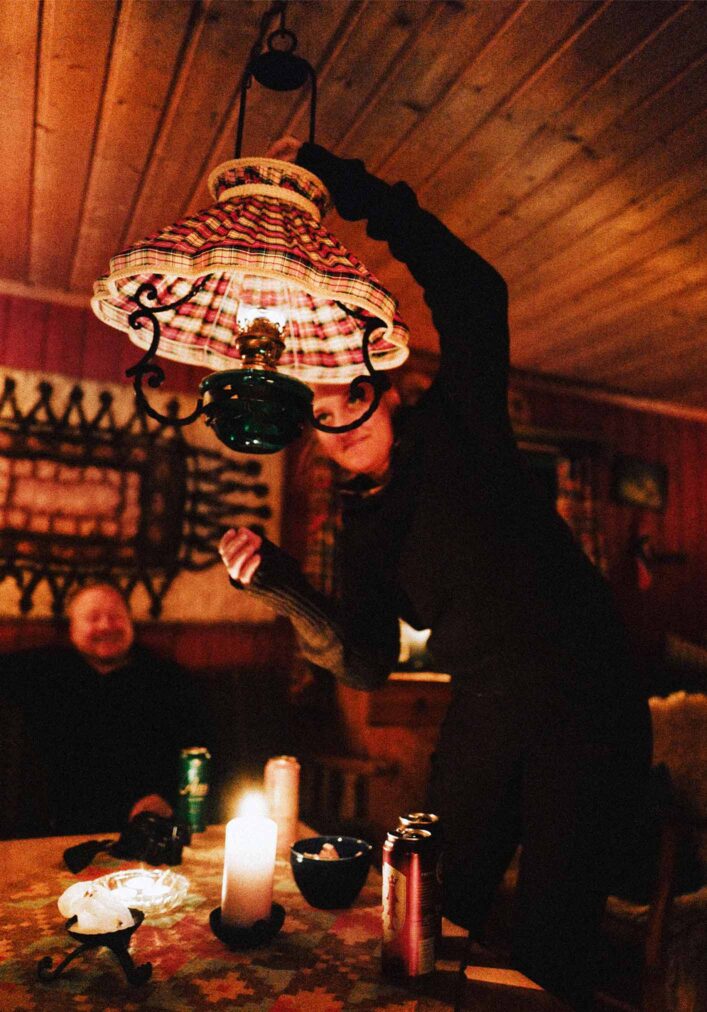 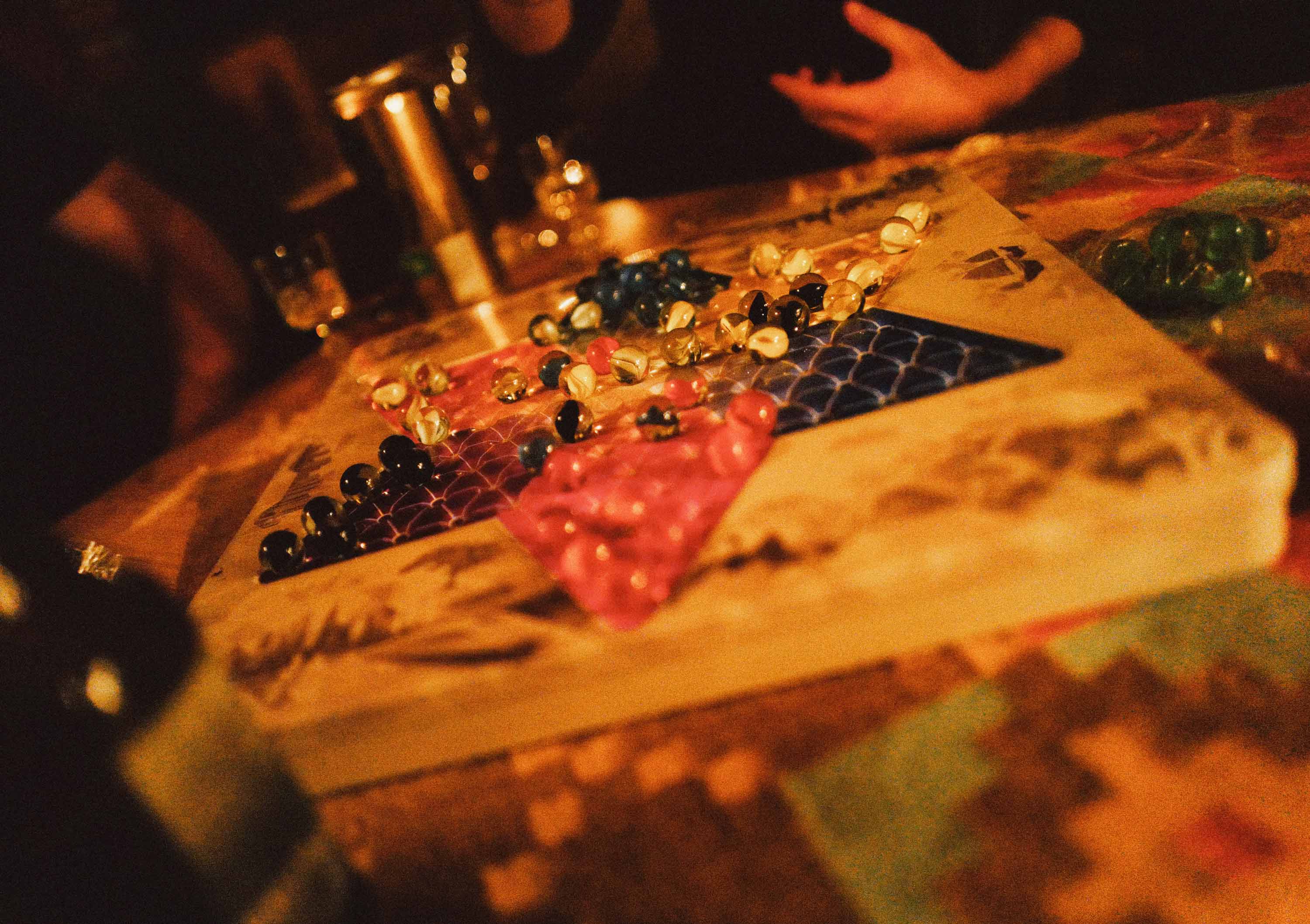 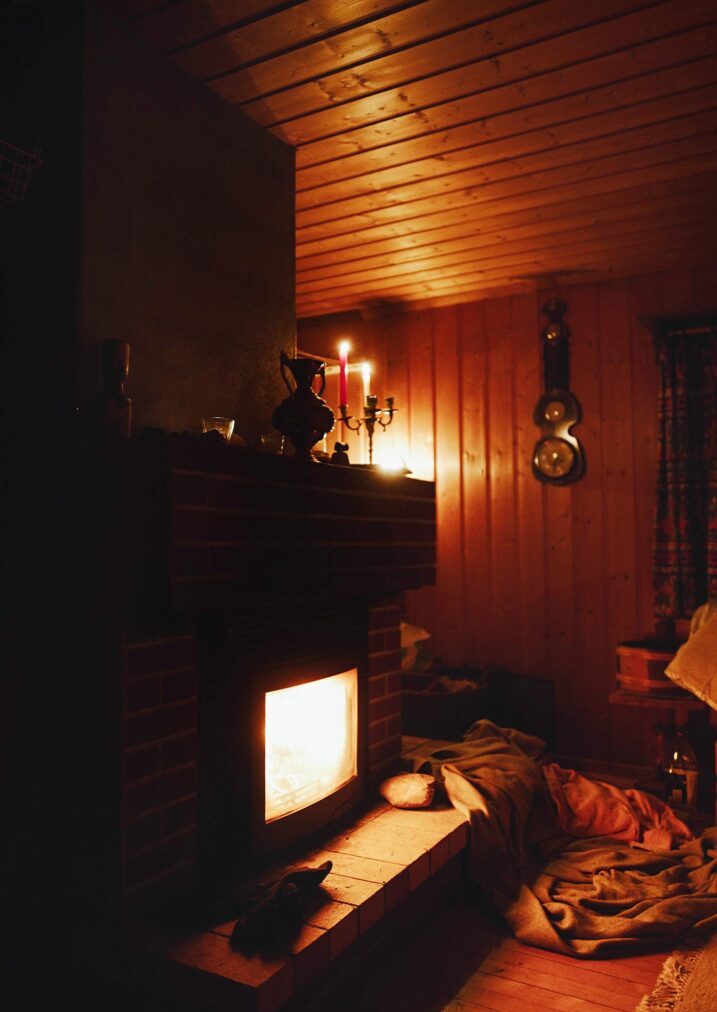 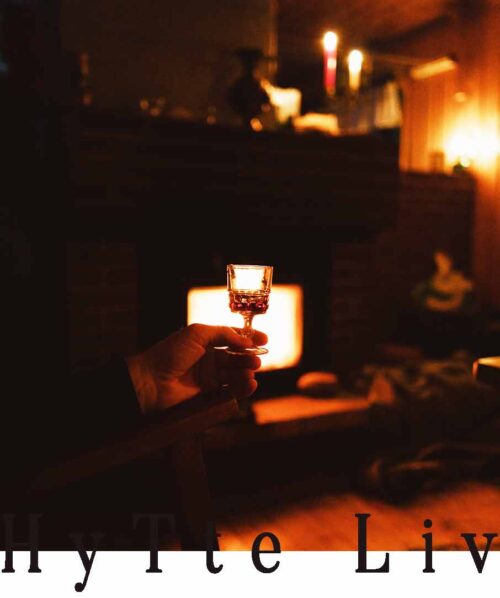 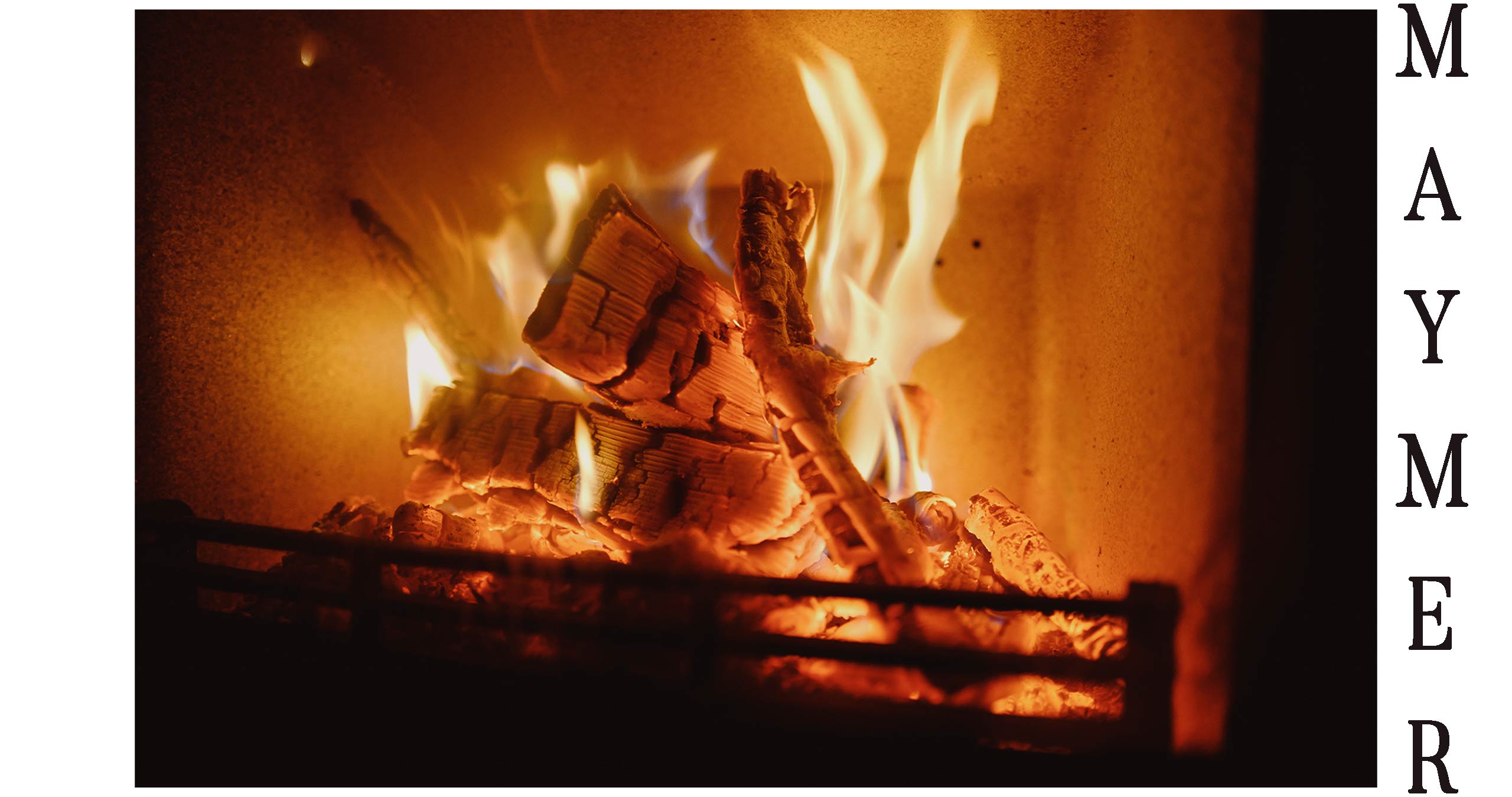 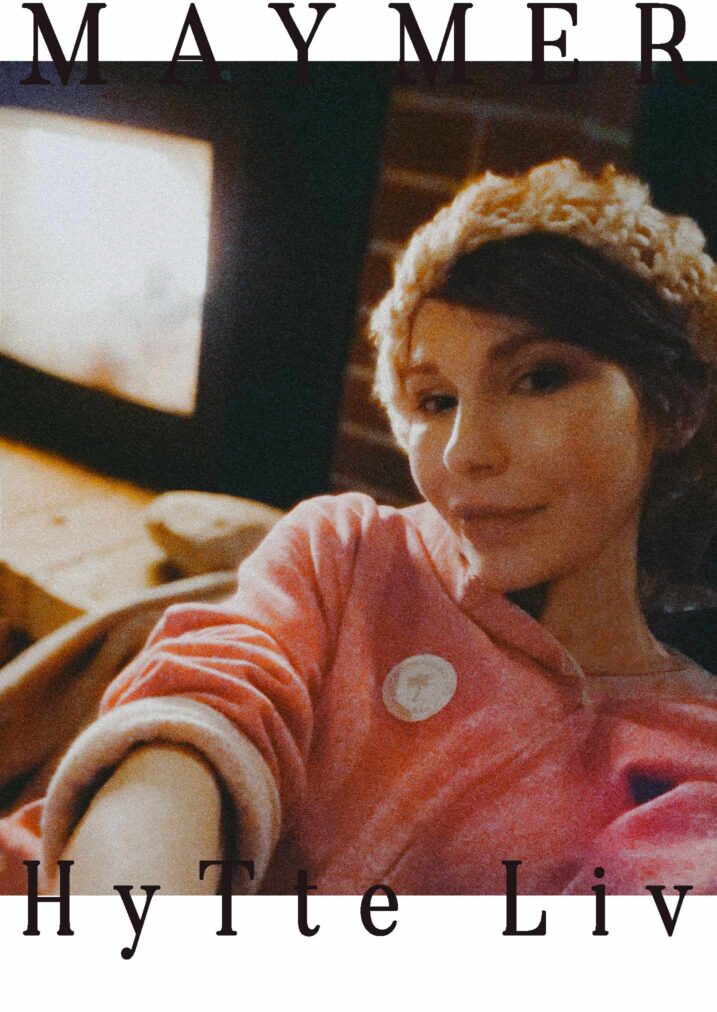 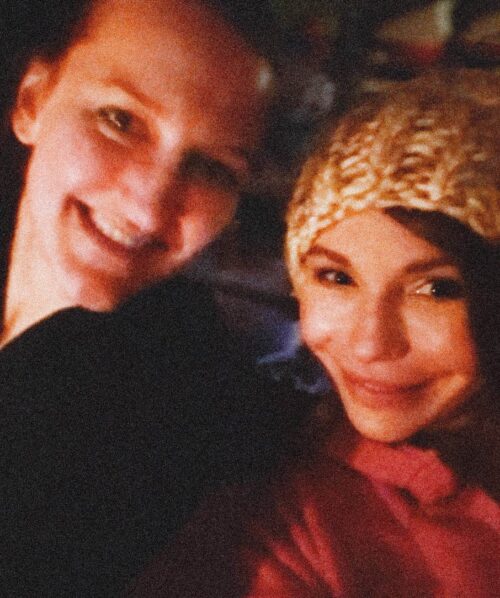 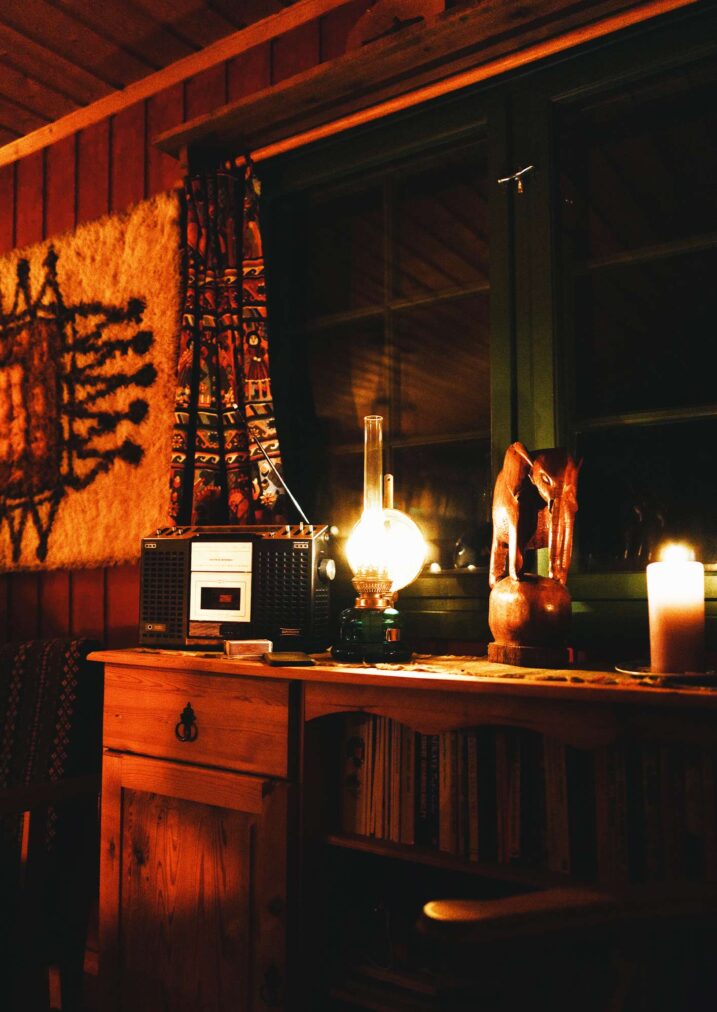 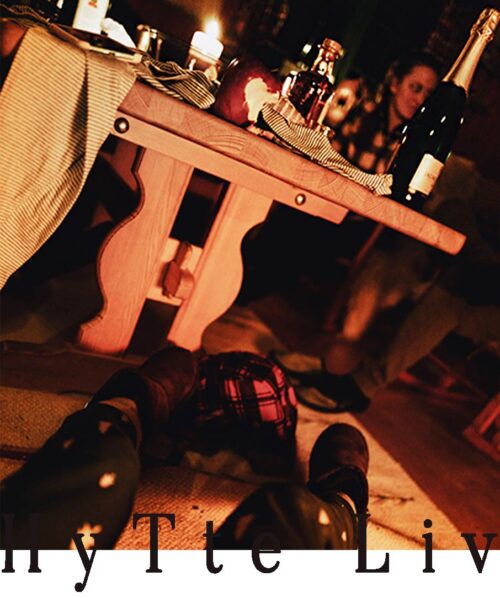 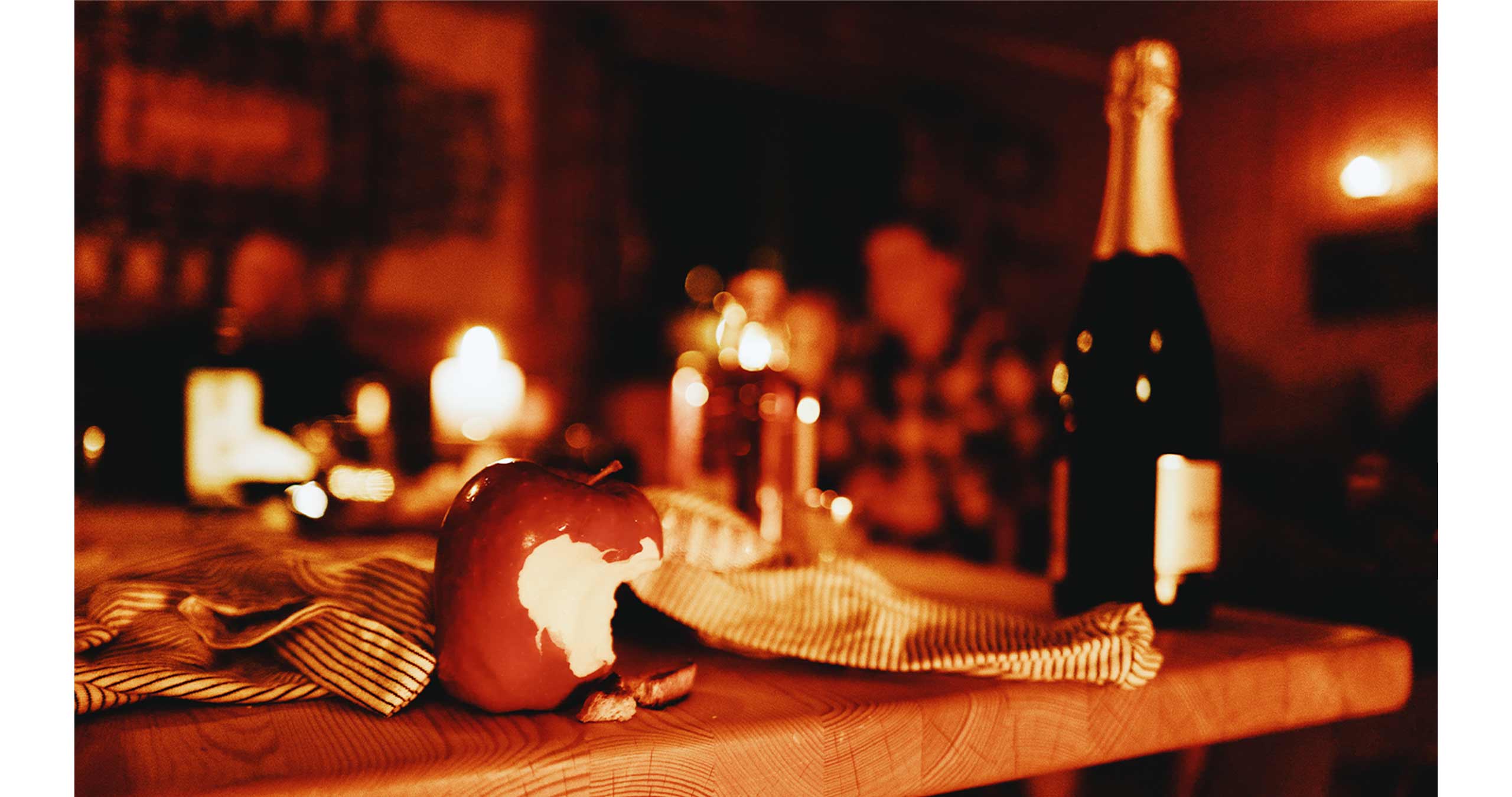 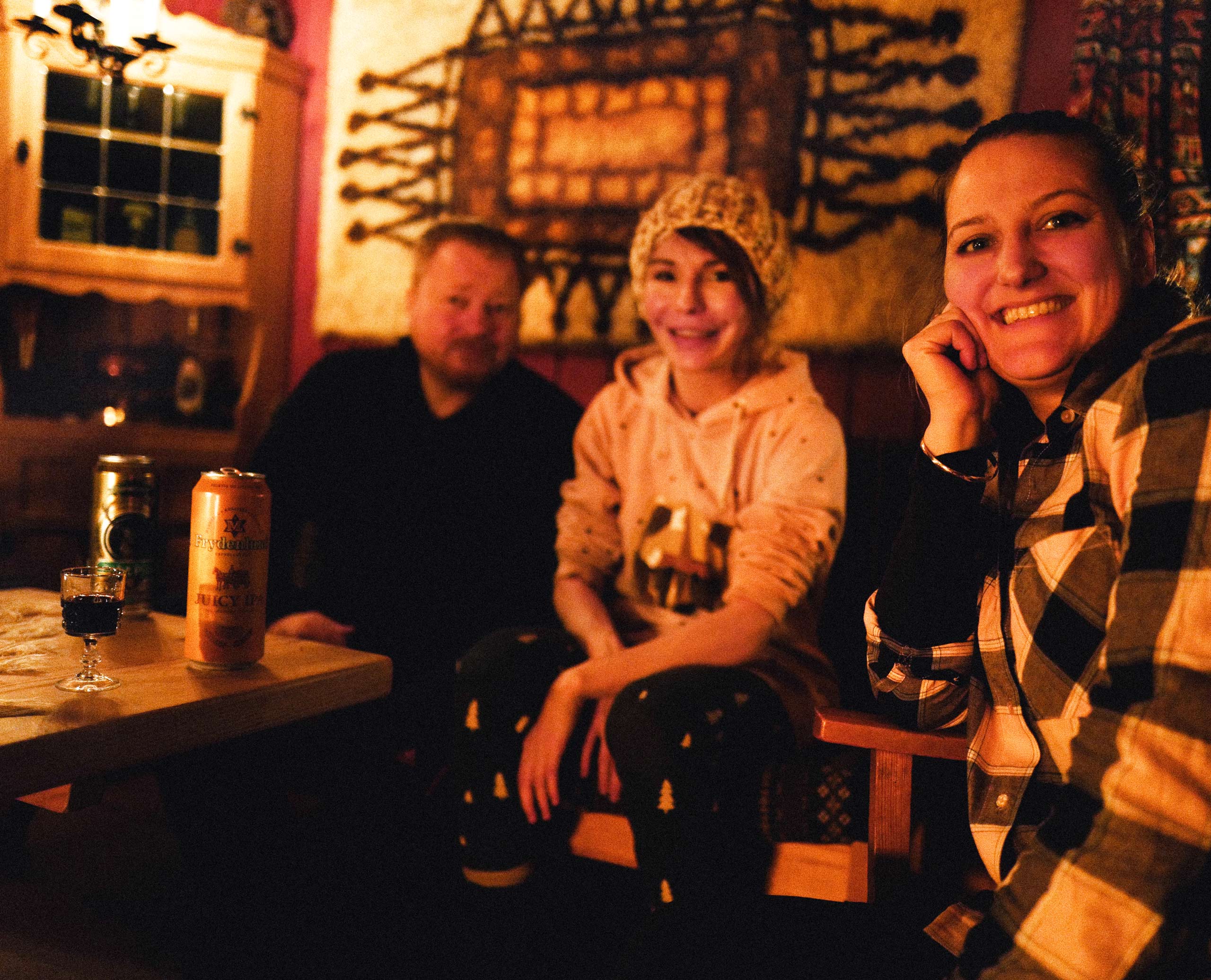 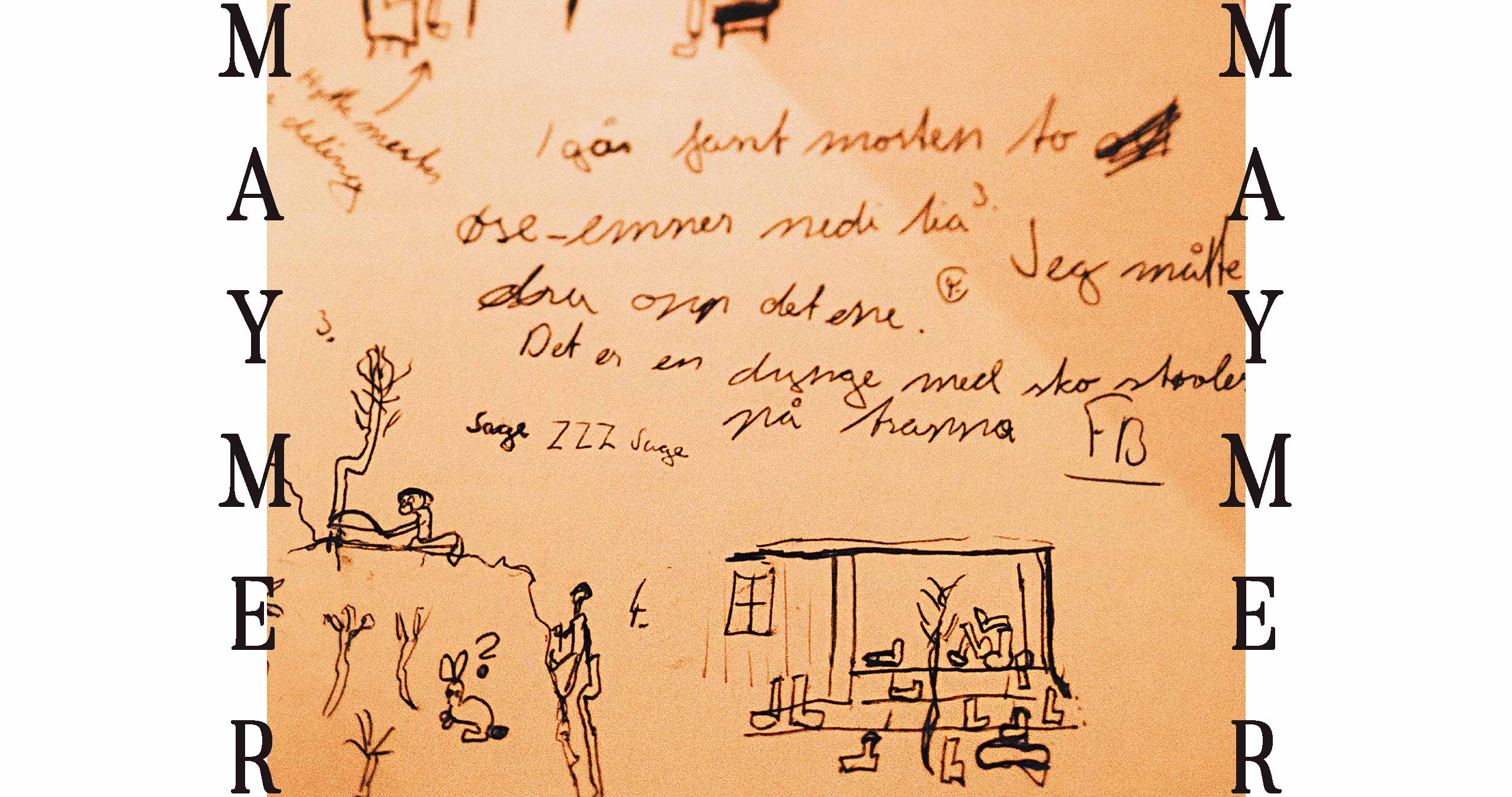 A log cabin symbolized the embrace between civilization and nature,
humans literally wrapping the trees around them as they might draw on a coat and hat.